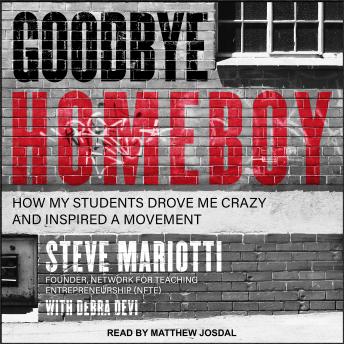 Goodbye Homeboy: How My Students Drove Me Crazy and Inspired a Movement

One sunny afternoon in 1982, a young businessman experienced a terrifying mugging in New York City that shook him to his core.

Tortured by nightmares about the teens who roughed him up, Steve Mariotti sought counseling. When his therapist suggested that he face his fears, Mariotti closed his small import-export business and became a teacher at the city's most notorious public school-Boys and Girls High in Bed-Stuy.

Although his nightmares promptly ceased, Mariotti's out-of-control students rapidly drove him to despair. One day, Mariotti stepped out of the classroom so his students wouldn't see him cry. In a desperate move to save his job, he took off his watch and marched back in with an impromptu sales pitch for it. To his astonishment, his students were riveted.

Mariotti realized his students felt trapped in soul-crushing poverty. They saw zero connection between school and improving their lives. Whenever Mariotti connected their lessons to entrepreneurship, though, even his most disruptive students got excited about learning.

By turns tragic and hilarious, Goodbye Homeboy shares Mariotti's flaws and missteps as he connects deeply with his troubled students-saving himself in the process.