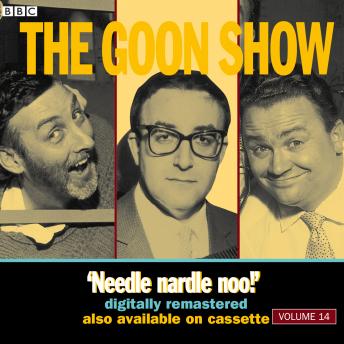 Ladies and gentlemen, it's the highly esteemed Goon Show! From 1951 to 1960, the Goons ruled the airwaves, the most celebrated and influential clowns in the history of radio. Go on, break out with Childe Harolde (37 years old and still in his pram) in The Childe Harolde Rewarde. Get on the Marrakesh trail with Lord Seagoon in The Gold Plate Robbery. Or join soggy Squire Seagoon as he gets bogged down in Queen Anne's Rain, and thrill to the heroics of Fifth Lieutenant Seagoon at The Battle of Spion Kop (intelligence has established that the people who are attacking him are the enemy). Yes folks, it's the Goons at war and peace, four more classics of cult muttery from those wireless wizards Spike Milligan, Harry Secombe and Peter Sellers. And why has Neddie deserted his post? It's got woodworm, Jim.