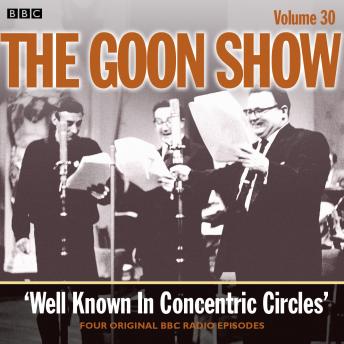 More surreal clowning from one of the greatest comedy teams on radio. Goon but not forgotten! In these digitally-remasterd episodes, Ned Seagoon, who is bored at the bank where works, decides to run away - with the bank's money. Also, Neddie follows a trail of cold batter puddings to North Africa; has his snow-plough stolen during the Great English Blizzard and is approached by Mandarin Grytpype-Thynne and General Kash-Mai-Chek to participate in an audacious financial coup. Includes: Dishonoured or The Fall of Neddie Seagoon - Series 5, Episode 12 (14 December 1954); The Dreaded Batter Pudding Hurler (of Bexhill-on-Sea) - Series 5, second performance (not transmitted); The Hastings Flyer - Robbed - Series 6, Episode 15 (27 December 1955) and China Story - Series 6, second performance, National Radio Show (29 August 1956).