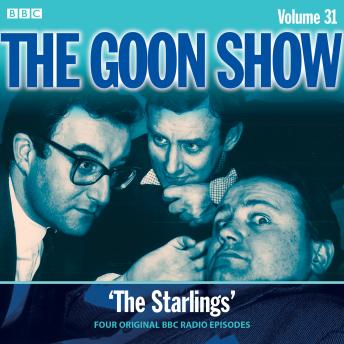 Goon but not forgotten! Here is a chance to enjoy more surreal clowning from one of the greatest comedy teams on radio. During the course of these four digitally-remastered episodes, London is beseiged by birds and Winston Seagoon battles the Big Brother Corporation. The episodes included are: The Starlings - Series 4 Special (31 August 1954), The Missing Scroll - Series 5, Episode 19 (1 February 1955), Nineteen Eighty-Five - Series 5, Episode 20 (8 February 1955), and The Man Who Won the War (AKA Seagoon MCC) - Series 6, Episode 1 (20 September 1955).

Please note: Nineteen Eighty-Five is a remake of the same titled episode from 4 January 1955, previously available on The Goon Show Volume 5.