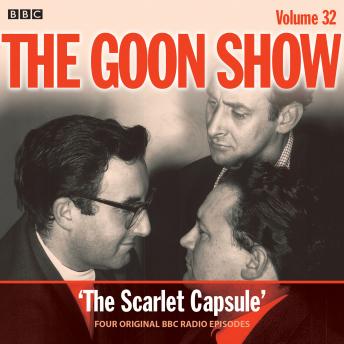 Goon but not forgotten! Here is a chance to enjoy more anarchic clowning from one of the greatest ever radio comedy teams. The Goon Show ran on the BBC Home Service from 1951 to 1960, and influenced an entire generation of subsequent comedians. Its legacy has lasted over sixty years, with classic episodes continuing to divert and delight audiences worldwide.

In these four digitally-remastered episodes, written by Spike Milligan and Eric Sykes, Ned tracks down the terrorists responsible for producing the artificial foreign fog that is blanketing London; Inspector Seagoon investigates a bank robbery; Neddie Seagoon stars in a tale of spies, counter-spies and exploding shirt-tails and Professor Ned Quatermass unravels a mystery around an unexplained Thing discovered deep below London.