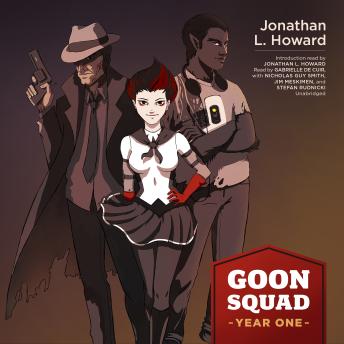 An ongoing, episodic 'prose comic' from which the pictures are summoned by the magic of words, Goon Squad is set in an alternate version of modern-day Manchester. Its biggest divergence from the real city is that it-along with most other large urban centers-has a team of superheroes to protect it against unusual threats with which the conventional forces of law and order would have problems.
Goon Squad: Year One offers three action-packed volumes in a single collection:
Goon Squad, Vol. 1: Special Talents
'The New Girl''Nightclubbing''By the Water, by the Grave''Changes''No-No Dojo''Exterminating Angel'
Goon Squad, Vol. 2: Without Sin
'A Star in Strange Ways''Holy Fool''Dead Man Tells Tale''A Brief History of the Goon Squad''Tale of Terror''Pomona Island'
Goon Squad, Vol. 3: Old Enemies
'Life during Wartime''Red Wolf, Red Wolf, Does Whatever a Red Wolf Can''Shadow of the Vivisector''The Man from Switzerland''The End of the Year Show'