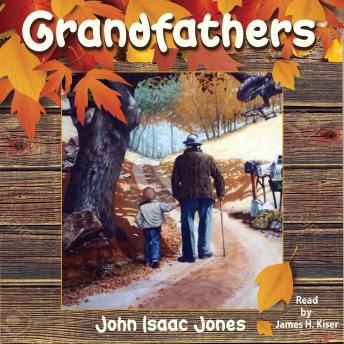 "I like talking to you, Granddaddy," the child said.
"I like talking to you, too, little boy," the grandfather said.
Suddenly, the child burst into tears and ran to his grandparent.
"Oh, Granddaddy," the child sobbed, leaping into his grandfather's arms. "I love you! I love you! I love you!"
For a full ten seconds, the child clung to the grandfather's neck with all his might, shedding huge tears.
As the grandfather and grandson held one another in a tight embrace, it was if the future was trying to hold on to the past. In his heart, the child knew that someday the big wheel would stop turning in his grandfather's life. The grandfather also knew that. He knew this child would someday stand over his grave and weep for him even as he had for his own grandfather. That was what made it so terribly sad. Both knew instinctively that nothing could stop the eternal transition from the old to the new. The forward movement of the big wheel was an undeniable certainty. Nothing, absolutely nothing, could stop its forward progress.'