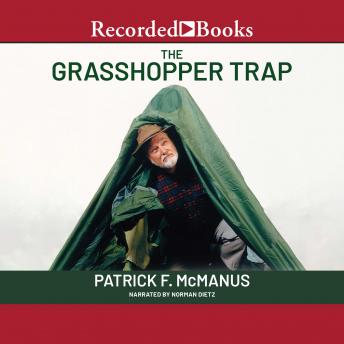 Often compared to Garrison Keillor and Mark Twain, Patrick F. McManus maintains just the right balance between baffled innocence and conspiratorial confidence. Since 1979, this humorist has been delighting readers with hilarious stories recounting his childhood in rural Idaho and relating his misadventures in the great outdoors. Whether you're a sportsman or a couch potato, he will have you laughing out loud at his escapades. In this collection of 30 tall tales, McManus introduces you to the perils of Trailer Trials and Mean Tents. Like Hemingway, McManus hunts the big fish in Down and Way Out in Brazil. The title tale, The Grasshopper Trap, unveils an ingenious invention for catching fish bait in motion. And in Hunting Camp Etiquette, McManus becomes a rustic Miss Manners. Narrator Norman Dietz adds additional spice to each impish line. You won't want to miss the other audio productions of McManus' works, including Never Sniff a Gift Fish and The Night the Bear Ate Goombaw.

This title is due for release on October 2, 2009
We'll send you an email as soon as it is available!