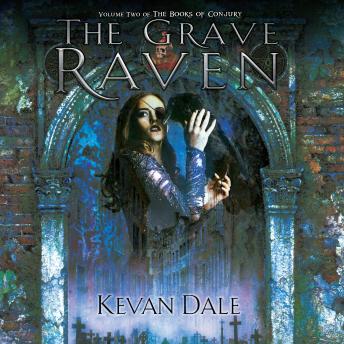 The Grave Raven: The Books of Conjury Volume Two

To fulfill her oath, she must enter a world of evil. To serve her mentor, she must help him release its power.

Massachusetts, 1737. Kate Finch is determined to keep her word. But between secretly teaching magic to the governor’s daughter, juggling her mentor’s increasingly urgent demands, and the bold pledge she gave to the rebels, the young witch isn’t certain how many vows she can honor. And with the missing girl she seeks speaking to her through a dead body, Kate worries she’s in over her head when the corpse coughs up a murdered man’s ring.

As she races to access the dark realm to attempt a rescue, she discovers the truth about her sorcerous heritage. And with her master’s grand plans to control the demonic forces polluting Salem about to come to fruition, Kate fears he may unleash a catastrophe that could destroy the entire world.

Can she balance saving an innocent trapped in a hellish domain and protecting the colony from disaster?

The Grave Raven is the riveting second volume in The Books of Conjury historical fantasy series. If you like earth-shattering magic, breathtaking twists and turns, and heroines battling impossible odds, then you’ll love Kevan Dale’s nail-biting adventure.

Buy The Grave Raven to put loyalty to the test today!