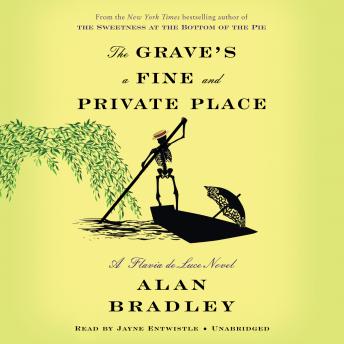 The Grave's a Fine and Private Place: A Flavia de Luce Novel

In the wake of an unthinkable family tragedy, twelve-year-old Flavia de Luce is struggling to fill her empty days. For a needed escape, Dogger, the loyal family servant, suggests a boating trip for Flavia and her two older sisters. As their punt drifts past the church where a notorious vicar had recently dispatched three of his female parishioners by spiking their communion wine with cyanide, Flavia, an expert chemist with a passion for poisons, is ecstatic. Suddenly something grazes her fingers as she dangles them in the water. She clamps down on the object, imagining herself Ernest Hemingway battling a marlin, and pulls up what she expects will be a giant fish. But in Flavia’s grip is something far better: a human head, attached to a human body. If anything could take Flavia’s mind off sorrow, it is solving a murder—although one that may lead the young sleuth to an early grave.

Praise for The Grave’s a Fine and Private Place

“Flavia [is] irrepressible, precocious and indefatigable. . . . A whole new chapter of Flavia’s life opens as she approaches adolescence. Will she become the Madame Curie of crime?”—Bookreporter

“There’s only one Flavia. . . . Series fans will anticipate the details of this investigation, along with one last taste of Flavia’s unorthodox family life.”—Library Journal (starred review)

“Bradley’s unquenchable heroine brings ‘the most complicated case I had ever come across’ to a highly satisfying conclusion, with the promise of still brighter days ahead.”—Kirkus Reviews

Flavia books have the added benefit on audio books of being read by a wonderful narrator, Jayne Entwhistle, all the way through this series. Can not wait for Flavia's next adventure. Perfect for a long road trip because my husband enjoys them also. If you are fascinated by chemistry, and like murder mysteries and precocious protagonists, this book is for you.