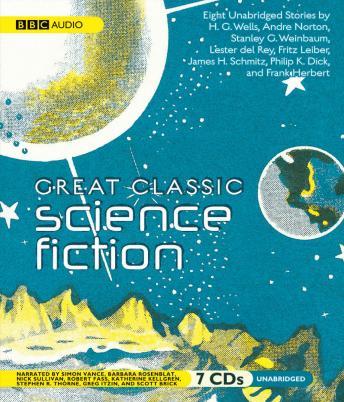 This superlative collection of futuristic tales explores ground-breaking supernatural themes from the founding heroes of the science-fiction genre. The short story form is perfect for capturing the atmospheric tension of these legendary stories.
This collection includes the following stories:
"The Door in the Wall" by H. G. Wells-A man must choose between the rationality of science and the magic of imagination."All Cats Are Gray" by Andre Norton-A down-on-his-luck spaceman and a mysterious woman and her cat take off to explore and bring back a derelict ship said to hold great treasure."A Martian Odyssey" by Stanley G. Weinbaum-A four-man crew lands on Mars and makes a startling discovery."Victory" by Lester del Rey-A victorious captain returns to his home planet after an alien war and finds that victory has a very steep price."The Moon Is Green" by Fritz Leiber-On post-apocalyptic Earth, a woman comes face-to-face with humanity exposed to catastrophe."The Winds of Time" by James H. Schmitz-When the spaceship is battered by an unknown force, the pilot has to investigate-and what he finds could alter his life forever."The Defenders" by Philip K. Dick-Years after nuclear war between the US and the Soviet Union has contaminated the Earth's surface, soldier robots continue the fight on humanity's behalf."Missing Link" by Frank Herbert-Lewis Orne is sent to investigate a missing ship and runs into "native" trouble on the planet Gienah III.