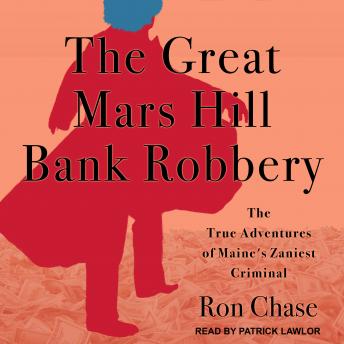 On November 12, 1971, Bernard Patterson, a much decorated Vietnam War hero, turned a real-life version of Don Quixote, Butch Cassidy, and Robin Hood all rolled into one package, robbed the Northern National Bank in Mars Hill, Maine. He escaped with $110,000; at the time, the largest bank robbery in the history of the state.

A tunnel rat and paratrooper in Vietnam who rose to the rank of Sergeant, he was awarded four bronze stars and recommended for a silver star for valor. He returned home to northern Maine broke and disillusioned. Wearing dark glasses, dressed in a Marx Brother's ankle length coat and wearing a blue wig, he robbed the bank, even though he was recognized by the elderly teller. He initially escaped by paddling a rubber raft down the Prestile Stream.

This was the beginning of a comic, outrageous, implausible journey that took him across the United States, then to Europe and North Africa before finally surrendering to authorities in Scotland Yard after he had spent most of the money. Along the way, he lived a raucous life of wine and women while hobnobbing in aristocratic hangouts and giving money to those he perceived to be in need; all the time staying just a heartbeat ahead of law enforcement officials.