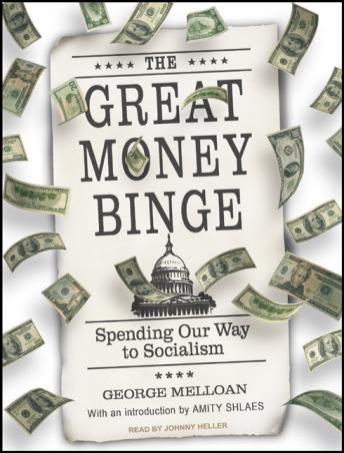 The Great Money Binge: Spending Our Way to Socialism

Prestigious newspaper editor George Melloan, who worked for the Wall Street Journal for more than half a century, is no stranger to the wild ups and downs of the American and world economies. Using detailed examples from the Crash of 1929 and from the Carter era, this brilliantly argued book explains how government intervention actually prevents the economy from recovering its natural balance. Unless lawmakers realize the true importance of using supply-side economics in our current crisis, warns Melloan, nothing will save us from a new era of disastrous inflation and widespread global depression.

Citing the importance of historical example, Melloan explains how the world of economics was completely changed in the 1930s under the influence of English economist John Maynard Keynes. His theories advocating government interventionist policies were wholeheartedly adopted as a response to the Great Depression and remained unquestioned until the 'supply-side revolution' of 1980, after the stagflation of the 1970s showed the inherent weaknesses of neo-Keynesian economics. By employing what is sometimes called 'Reaganomics,' President Ronald Reagan and his economic advisers sparked a quarter century of unparalleled prosperity. Unfortunately, as Melloan demonstrates, government policy soon began to revert to Keynesian theories, even though they are widely misunderstood and misapplied.

Now, with the Crash of 2008, our new president and government appear committed to ignoring the lessons of the past. With multibillion-dollar 'stimulus packages' becoming the norm, and a multitrillion-dollar national debt that will keep growing so long as present policies are continued, America can look forward to a very grim future indeed.

There is only one solution: we must return to our eroded supply-side principles. In the face of general misunderstanding, Melloan outlines a lucid and detailed explanation of exactly why we are currently sinking so rapidly, how this crisis compares to similar situations in the past, and exactly what must be done to return the United States to the economic vitality it enjoyed not so long ago.