The Great Spiritual Migration: How the World's Largest Religion Is Seeking a Better Way to Be Christian 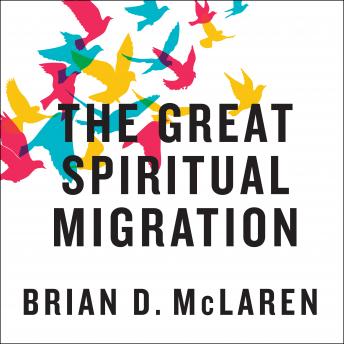 The Christian story, from Genesis until now, is fundamentally about people on the move-outgrowing old, broken religious systems and embracing new, more redemptive ways of life.

It's time to move again.

Brian McLaren, a leading voice in contemporary religion, argues that-notwithstanding the dire headlines about the demise of faith and drop in church attendance-Christian faith is not dying. Rather, it is embarking on a once-in-an-era spiritual shift. For millions, the journey has already begun.

Drawing from his work as global activist, pastor, and public theologian, McLaren challenges listeners to stop worrying, waiting, and indulging in nostalgia, and instead, to embrace the powerful new understandings that are reshaping the church. In The Great Spiritual Migration, he explores three profound shifts that define the change:

Spiritually, growing numbers of Christians are moving away from defining themselves by lists of beliefs and toward a way of life defined by love
Theologically, believers are increasingly rejecting the image of God as a violent Supreme Being and embracing the image of God as the renewing Spirit at work in our world for the common good
Missionally, the faithful are identifying less with organized religion and more with organizing religion-spiritual activists dedicated to healing the planet, building peace, overcoming poverty and injustice, and collaborating with other faiths to ensure a better future for all of us

With his trademark brilliance and compassion, McLaren invites listeners to seize the moment and set out on the most significant spiritual pilgrimage of our time: to help Christianity become more Christian.

Great Spiritual Migration: How the World's Largest Religion Is Seeking a Better Way to Be Christian