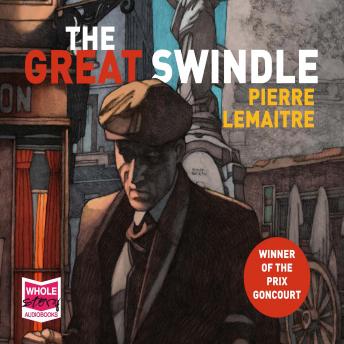 Winner of the prestigious Prix Goncourt, a timeless story of how war transforms lives in unexpected and often tragic ways as seen through the eyes of three World War I vets
The year is 1918, the war on the Western Front all but over. An ambitious officer, Lieutenant Henry D'Aulnay-Pradelle, sends two soldiers over the top and then surreptitiously shoots them in the back to incite his men to attack the German lines.
When another of D'Aulnay-Pradelle's soldiers, Albert Maillard, reaches the bodies and discovers how they died, the lieutenant shoves him into a shell hole to silence him. Albert is rescued by fellow soldier, the artist Edouard Péricourt, who takes a bullet in the face. The war ends and both men recover, but Edouard is permanently disfigured, and fakes his death to prevent his family from seeing him as a cripple. In gratitude for Edouard's rescue, Albert becomes the injured man's companion and caregiver.
Finding that the postwar gratitude for the soldiers' service is nothing more than lip-service to an empty idea, the two men scramble to survive, ultimately devising a scam to take money for never-to-be-built war memorials from small towns. Meanwhile, Lieutenant Pradelle has married Edouard's sister Madeline and is running a scam of his own that involves the exhumation of war victims.
In this sorrowful, heart-searching novel, the interwoven lives of these three men create a tapestry of the human condition as seen through the lens of war, revealing brutality and compassion, heroism and cowardice, in equal measure.