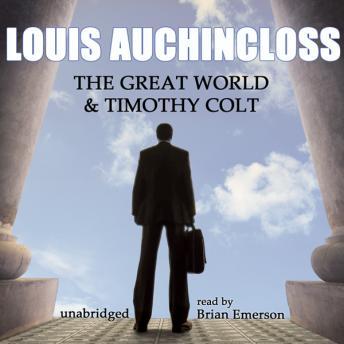 The Great World and Timothy Colt

Louis Auchincloss tells the story of a large Manhattan law firm'the kind of latter-day Olympus so rich and influential, so full of good grey heads, that it appears more a seat of government than a place of business.

It is the belief that law is the very essence of America's eminence that sustains Timothy Colt and makes him the tirelessly dedicated young lawyer he is. And it is belief in Timothy that brings his wife, Ann, to tolerate his grinding hours at the office and what in another profession might be regarded as neglect to his family. But as Timothy Colt rises in the firm, the opportunity to see the conflict between ethics and ambition at the very heart of Sheffield, Knox & Dale is thrust upon him, and his disillusionment begins.