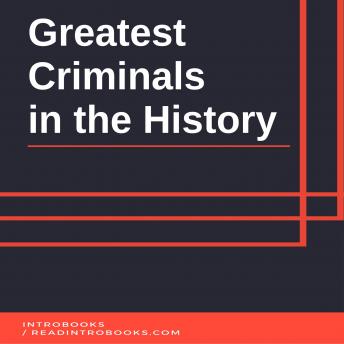 Greatest Criminals in the History

In ordinary language, crime is referred to as an unlawful act that is punishable by law. In the modern scenario, the term criminal law has been universally accepted to be the proper definition of the crime. However, there are various statutory definitions that have been provided for various specific purposes. Amongst all of the accepted views and beliefs, the most popular belief with respect to crime is that it is a category created by law. In other words, any act is considered to be a crime if it is declared as such by any applicable or relevant body of law. Another proposed definition of a crime or criminal offense is referred to as an act of harmful activity or deed that is harmful not only to the human beings but it could also be harmful to some community, society or even animals. The criminal acts, in general, are prohibited by the act of law and are also punishable under the act of law.

The various notions such as murder, theft, rape and several others are considered to be prohibited as these exist worldwide. The precise definition of the criminal offense as defined by the criminal law of each country states that with several criminal catalogs that are referred to as the criminal code, there is no comprehensive existence of any statute.

The government has the ultimate power to restrict the liberty for the commitment of a crime in a severe manner of any person. In the modern scenario, there are several procedures that might lead to investigations and trials that must be adhered to by the individuals. If an offender is found guilty, then he or she might be subjected or sentenced to several forms of reparations like a community sentence. The severity of the punishment might depend on the nature of the offense and might range from life imprisonment, execution and several forms of jurisdictions.

A crime can be anything that can be classified as an act of doing something criminal or offensive with certain motives that could be accompanied with the intention of harming someone or something. As every crime is associated with the violation of the law, they must be properly implemented and given punishment under the acts of law.

The human civilization has observed several cases of crime in its history. We aim to enlighten you about the same through the article. You can gain an insight into some of the most deadly and notorious criminals the world has ever observed in history.

Greatest Criminals in the History