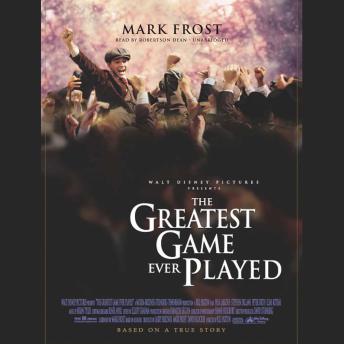 The Greatest Game Ever Played: Harry Vardon, Francis Ouimet, and the Birth of Modern Golf

Francis Ouimet and Harry Vardon came from different worlds and different generations, but their passion for golf set them on parallel paths that would collide in the greatest match their sport had ever known. A young Massachusetts native, Francis was only three years removed from his youthful career as a lowly caddie. Harry was twice his age, the greatest British champion in history, and innovator of the modern grip and swing. Through exacting hard work, perseverance, and determination, Harry Vardon had escaped a hopeless life of poverty; the unknown Ouimet dared to dream of following in his hero’s footsteps. When the two men finally came together in their legendary battle at the 1913 US Open, its heart-stopping climax gave rise to the sport of golf as we know it today.

Weaving the stories of Ouimet and Vardon as his narrative, Mark Frost creates a uniquely involving, intimate epic that is equal parts sports biography, sweeping social history, and emotional human drama. The Greatest Game Ever Played is a must-listen for millions of sports and history fans—and all who have ever dared to reach for their dreams.

This story, which I felt compelled to listen to after watching the movie adaptation and falling in love with those versions of real life people, is every bit as captivating as the film if not more so. Mark Frost transforms golf into the a game of chivalry and its late 1800 and early 1900 players into knights of the highest order. Events are contextualized in such a way that it is every bit the underdog story of the film while also having the idea of elitism, patriotism, the American dream, and triumphs, defeats, sportsmanship, and she hubris. If you are a fan of golf, of history, or even just the film, give this book a listen. I doubt you'll be disappointed.