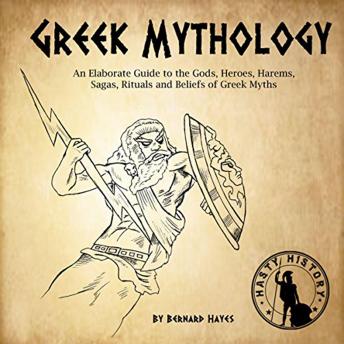 In this book, Greek Mythology: An Elaborate Guide to the Gods, Heroes, Harems, Sagas, Rituals and Beliefs of Greek Myths, the listener will be taken to the ancient customs and beliefs of the ancient Greeks. The report is dedicated to the gods the Greeks worshiped. You will find, among others:

A description and explanation of the Greek mythological gods and goddesses and their heavenly powersThe relationships, marriages, and complicated soap opera stories that were told in Ancient GreeceUnique characteristics of each of the gods and the most important legends about themRecords of their wars, struggles, adultery, and acts of revenge
The Greek had many heroes in their myths and legends, and you will be introduced to both of them in this guide. Greek Mythology is intricate and complex, and the ideals behind their mythological beliefs were often intertwined with real life events. This book will examine how both myth and fact contributed to the culture and traditions of the Greek and how these influences and stories continue to live on throughout the centuries!