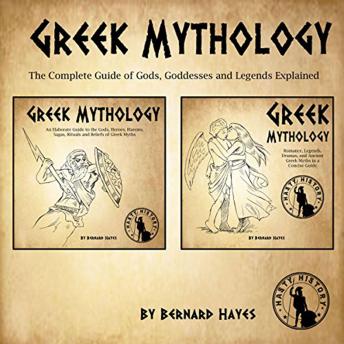 Two audiobooks in one volume!

Book 1: In this book, Greek Mythology: An Elaborate Guide to the Gods, Heroes, Harems, Sagas, Rituals and Beliefs of Greek Myths, the listener will be taken through the ancient customs and beliefs of the ancient Greeks. The report is dedicated to the gods the Greeks worshipped. You will find, among others:


A description and explanation of the Greek mythological gods and goddesses, and their heavenly powersThe relationships, marriages, and complicated soap opera stories that were told in Ancient GreeceUnique characteristics of each of the gods, and the most important legends about themRecords of their wars, struggles, adultery, and acts of revenge

The Greek had many heroes in their myths and legends, and you will be introduced to both them in this guide.

Greek mythology is intricate, complex, and the ideals behind their mythological beliefs were often intertwined with real life events. This book will examine how both myth and fact contributed to the culture and traditions of the Greeks, and how these influences and stories continue to live on throughout the centuries!


Book 2: Hear about some of the most interesting, best-known myths from ancient Greece. In this elaborate guide, you'll learn all about the dilemmas, relationships, and trials the Greek gods, goddesses, and other mythical creatures went through. Examples are:

All the trials of Heracles (Hercules), Theseus, and Perseus, the Greek, epic heroes of mythologyThe story of Daedalus and IcarusLegends that include Pelops, Argonauts, and HeraclidaeThe entire siege of Troy explainedStories about Oedipus, Cadmus, and BellerophonAnd much, much more!