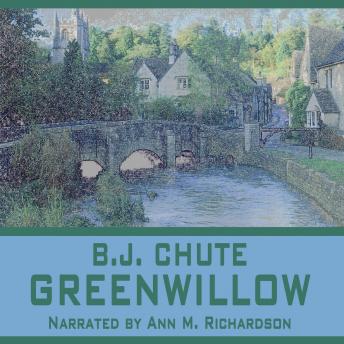 In Greenwillow, B.J. Chute has woven a tale of loyalty, love and humor into a timeless classic. Set in the whimsical town of Greenwillow, Chute’s characters are eccentric and irresistible—there is sweet Dorie who bakes bilberry tarts and dreams of a happy ending; the cow that kneels down at Christmas; two Reverends battling over good and evil—and Gideon, who loves the land with a passion we can only envy. Chute has an extraordinary gift for using words in an usual way that lends character to her descriptions and gives her writing an entirely unique voice. Her language is lyrical and utterly delightful. Perhaps B.J. Chute's best-known novel, a critic described Greenwillow as "a deeply moving, gently humorous and serenely wise story of young love and self-discovery." Greenwillow was brought to the Broadway stage in 1960, starring Anthony Perkins, with book by Lesser Samuels and Frank Loesser, and music and lyrics by Frank Loesser.

A bit of trivia. Anthony Perkins was simultaneously filming Alfred Hitchcock's classic shocker Psycho while rehearsing Greenwillow. Over the years, Perkins, in interviews, always said that his stand-in was used in the filming of the infamous shower scene, because he was rehearsing a Broadway show. Greenwillow was that show.