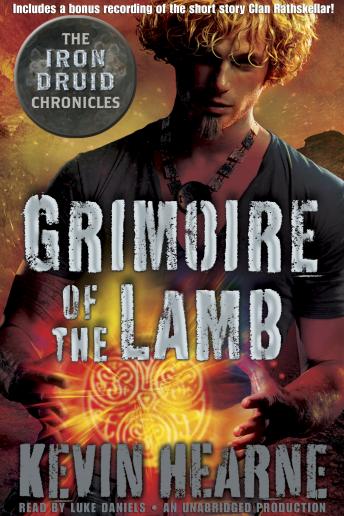 Grimoire of the Lamb: An Iron Druid Chronicles Novella

From the author of The Iron Druid Chronicles comes a rollicking, all-new urban-fantasy adventure featuring Atticus O’Sullivan. Atticus has a history of messing with the gods, and in this eBook original novella, he’ll have to outfox a deity at her own deadly cat-and-mouse game.

When he’s not vanquishing villainous gods or dodging demons, two-thousand-year-old Druid Atticus O’Sullivan can be found behind the counter of Third Eye Books and Herbs in modern-day Tempe, Arizona, literally minding his own business. But when an evil sorcerer—and amateur shoplifter—snatches an ancient Egyptian tome of black magic, The Grimoire of the Lamb, Atticus is not sheepish about pursuing him to the ends of the earth . . . or at least to the Land of the Pharaohs.

Unfortunatel,y Atticus already has enemies in Egypt—including cat goddess Bast, who wants her own book of mischief back from the Druid. In the streets of Cairo, she sends a feline phalanx after Atticus and his Irish wolfhound, Oberon. With fur still flying, Atticus must locate the sorcerer’s secret lair—where he will face killer crocodiles, spooky sarcophagi, and an ancient evil Egyptian who’s determined to order the sacrificial lamb special tonight.

Includes a bonus recording of the short story Clan Rathskellar!

Praise for Kevin Hearne and The Iron Druid Chronicles

“Celtic mythology and an ancient Druid with modern attitude mix it up in the Arizona desert in this witty new fantasy series.”—Kelly Meding, author of Three Days to Dead

“[Atticus is] a strong modern hero with a long history and the wit to survive in the twenty-first century. . . . A snappy narrative voice . . . a savvy urban fantasy adventure.”—Library Journal, on Hounded

Grimoire of the Lamb: An Iron Druid Chronicles Novella