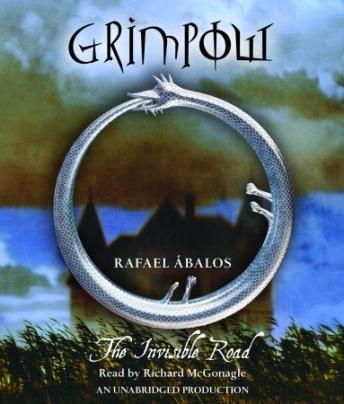 GRIMPOW HAD NO idea who the dead man was, but hidden in his leather bag was a treasure that would change his life forever. Ruby andemerald encrusted daggers, silver coins, jewels, and a letter with a golden seal depicting a snake swallowing its own tail. And clutched in the man's firm grip - a stone. A stone that will shape Grimpow's destiny. For when he holds it, strange things begin to happen. Visions of places he's never been fill his mind and he's able to read the strange language in the letter, a message meant for someone else entirely.So begins Grimpow's journey with the stone - a centuries-long journey that has driven sane men crazy, turned peaceful men violent, and made strong men powerless. No man has ever unlocked its secrets. But no boy has ever tried.

I have mixed emotions about this book. it just did not work for me. I struggled getting through it at times. If it wasn't for the excellent work of the narrator, I probably would have stopped about half way through. That being said, if you are a fan of this genre you will probably find this book to be a decent listen. It’s just not my thing. However, I can still speak to the technical aspects of the book. To that end the author spent a lot of time on character development – way too much time in my book and I do appreciate the effort when done properly. The attention to detail, while necessary for fans, was way over the top for me. I just got lost and found myself having to go back . Eventually I even stopped doing that so I could just get through the dang book. With all the build-up to the end - it seemed very abrupt and quite a letdown. Simply stated, unless you really like books based in the 12 & 13th century – skip this one. Even if you do…skip it anyway.