A Guardian of Slaves 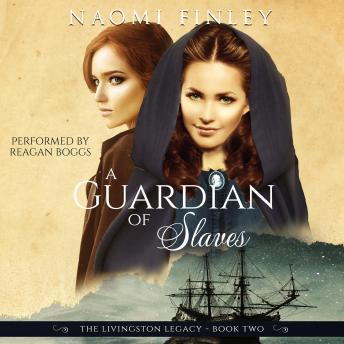 Willow Hendricks is now the Lady of Livingston. She manages this plantation with her father and best friend Whitney Barry. The two women continue her parents' secret abolitionist mission. They use the family's ships and estates to transport escaped slaves along the channels to freedom. Willow's love for Bowden Armstrong is as strong as ever, but she is not ready to marry and have a family because of her attention to these noble pursuits. Torn by her love for him, can their bond survive his reluctance to support her efforts with the Underground Railroad?

Meanwhile, whispers among the quarters sing praises of a mysterious man in the swamps helping slaves escape. He is called the Guardian. They believe he will save them from brutal slave catchers and deliver them to the promised land. Masked bandits roam the countryside, but the Guardian and the criminals evade capture. A series of accidents and mysterious disappearances raise alarm throughout the region. Who can Willow and Whitney trust? One false move or slip could endanger the lives of everyone they love and bring ruin to the Livingston Plantation.