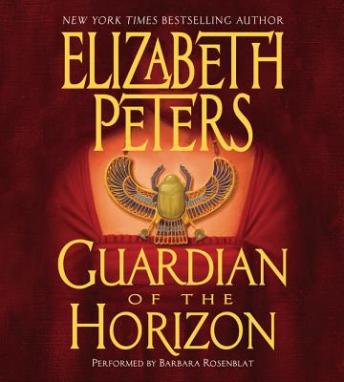 Guardian of the Horizon

A lost journal of Amelia Peabody has been miraculously recovered: a chronicle from one of the 'missing years' -- 1907-1908 -- shedding light on an already exceptional career...and an unexpected terror.

Ousted from their most recent archaeological dig and banned forever from the Valley of the Kings, the Emersons are spending a quiet summer at home in Kent, England, when a mysterious messenger arrives. Claiming to be the teenage brother of their dear friend Tarek, he brings troubling news of a strange malady that has struck down Tarek's heir and conveys his brother's urgent need for help only the Emersons can provide.

The family sets off in secret for the mountain fortress from which they narrowly escaped ten years before. The Emersons are unaware that deception and treachery are leading them onward into a nest of vipers -- where a dreadful fate may await. For young Ramses, forced to keep his growing love for the beautiful Nefret secret, temptation along the way may prove his ultimate undoing. And a dark past and grim obligation has ensnared Nefret once again, as she is helpless to save those she loves most from the prison of the Lost Oasis.

Rich with suspense, surprises, unforgettable characters, and the intoxicating atmosphere that has earned her the coveted title of Grand Master two times over, the remarkable Elizabeth Peters proves once again that, in the world of historical adventure fiction, she is truly without peer.

I love all the Amelia Peabody mysteries and this one was no exception. The reader is fantastic, one of the best by far! The only thing keeping this from five stars is that I think the abridgement kept out a few details that would've explained a bit more of the story.

If you like Elizabeth Peters, this one won't disappoint. If you're not familiar with her, you might want to start with some of her earlier books to get acquainted with her characters earlier in their lives. Always fun and entertaining and love the English accents!!

This title is due for release on June 29, 2004
We'll send you an email as soon as it is available!