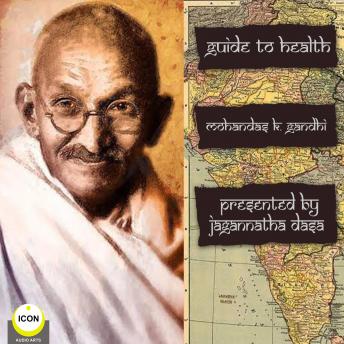 'I will not let anyone walk through my mind with their dirty feet. Nobody can hurt me without my permission. Happiness is when what you think, what you say, and what you do when are in harmony." MAHATMA GANDHI

The great Mahatma Gandhi, an ambitious attorney turned simple orthodox Hindu holy man single-handedly invented the philosophy of non violent non cooperation which successfully dislodged the British empire from their long held, tyrannical, imperial rule over India. In this in depth, inspirational audiobook presented by well known author actor narrator Jagannatha Dasa, the important, and still timely thoughts of this iconic social reformer on the subject of clean living are neatly revisited. This Imperative socio-political, philosophical, esoteric profile in courage of simple good health is as important today as it was in the Mahatma's time as many of us face an admittedly dreadfully unhealthy lifestyle arising from too much junk food, not enough rigorous exercise, a reliance on too many medicines and far too little faith in God. Here are the gentle, wise words of a soft spoken self realized man who not only asked seminal questions about the healthy life we all would benefit by, but also came up with powerful, tested solutions resulting in simple living but very high thinking. This Icon audiobook exclusive is perfect for all students of health and well being, social reformation, the spiritual science of yoga, curious commuters as well as all school and university systems.

JAGANNTHA DASA is the author of thirty two internationally best selling books published by the biggest publishers in the world from 1984 until today. He is also an acclaimed Hollywood film actor, director, designer, and is the voice on over 500 popular audiobooks.