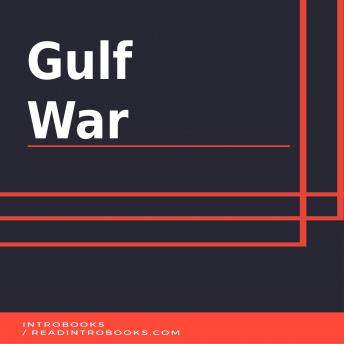 The Gulf War was war waged on Iraq which comprised of coalition forces that had 35 countries and was led by United Nations. The war was a response to Iraq's step taken to annex Kuwait. The Gulf War is also known as the Persian Gulf War. Iraq under the leadership of Saddam Hussein invaded Kuwait on August 2, 1990 with a purpose of procuring the large oil reserves of Kuwait to establish their power in the region and to annul the debt that it owed to Kuwait.
The next day on August 3, 1990 the United Nations Security Council asked Iraq to withdraw their army from Kuwait and when they denied obeying the instructions the United Nations Security Council enforced a worldwide ban trade with Iraq on August 6 of the same year. The government of Iraq then responded by formally seizing Kuwait on August 8, 1990.
Iraq's invasion in Kuwait and forced acquiring of the nation was also an open threat to Saudi Arabia. United States and European NATO allies rushed their troops to Saudi Arabia to prevent any attacks from Iraq. These armies were further joined by Egypt and many other Arab nations. The world witnessed live broadcast of the war especially by CNN. It was a decisive battle and the coalition forces had won against the Iraqi troops.