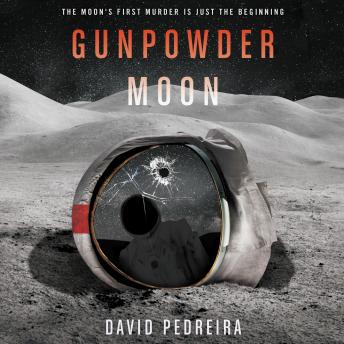 “Interesting quirks and divided loyalties flesh out this first novel in which sf and mystery intersect in a well-crafted plot...Pedreira’s science thriller powerfully highlights the human politics and economics from the seemingly desolate expanse of the moon. It will attract readers who enjoyed Andy Weir’s lunar crime caper Artemis.” -- Library Journal, starred review

A realistic and chilling vision of life on the Moon, where dust kills as easily as the vacuum of space…but murder is even quicker—a fast-paced, cinematic science fiction thriller, this debut novel combines the inventiveness of The Martian, the intrigue of The Expanse, and the thrills of Red Rising.

The Moon smells like gunpowder. Every lunar walker since Apollo 11 has noticed it: a burnt-metal scent that reminds them of war. Caden Dechert, the chief of the U.S. mining operation on the edge of the Sea of Serenity, thinks the smell is just a trick of the mind—a reminder of his harrowing days as a Marine in the war-torn Middle East back on Earth.

It’s 2072, and lunar helium-3 mining is powering the fusion reactors that are bringing Earth back from environmental disaster. But competing for the richest prize in the history of the world has destroyed the oldest rule in space: Safety for All. When a bomb kills one of Dechert’s diggers on Mare Serenitatis, the haunted veteran goes on the hunt to expose the culprit before more blood is spilled.

But as Dechert races to solve the first murder in the history of the Moon, he gets caught in the crosshairs of two global powers spoiling for a fight. Reluctant to be the match that lights this powder-keg, Dechert knows his life and those of his crew are meaningless to the politicians. Even worse, he knows the killer is still out there, hunting.

In his desperate attempts to save his crew and prevent the catastrophe he sees coming, the former Marine uncovers a dangerous conspiracy that, with one spark, can ignite a full lunar war, wipe out his team . . . and perhaps plunge the Earth back into darkness.

It seemed to drag a bit at the beginning and the reader felt a little monotone. It was an ok read.