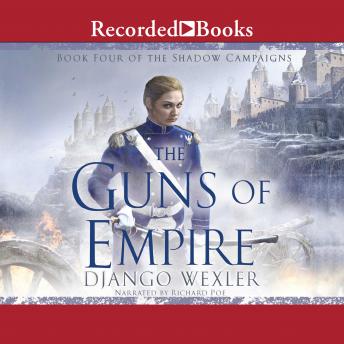 The Guns of Empire

Fourth in the 'audacious and subversive'* Shadow Campaigns novels, following The Price of Valor, The Shadow Throne, and the acclaimed The Thousand Names. After their defeats at the hands of general Janus bet Vhalnich, the opposing powers have called all sides to the negotiating table, in hopes of securing an end to the war. Queen Raesinia of Vordan is anxious to see the return of peace, but Janus insists that any peace with the Sworn Church of Elysium is doomed to fail. Soldiers Marcus d'Ivoire and Winter Ihernglass find themselves caught between their general and their queen. Now, each must decide which leader truly commands their loyalty-and what price they might pay for final victory. And in the depths of Elysium, a malign force is rising-and defeating it might mean making sacrifices beyond anything they have ever imagined.