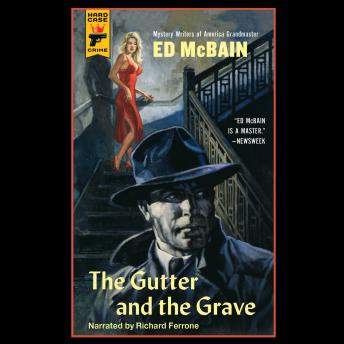 The Gutter and the Grave

Detective Matt Cordell was happily married once, and gainfully employed, and sober. But that was before he caught his wife cheating on him with one of his operatives and took it out on the man with the butt end of a .45. Now Matt makes his home on the streets of New York and his only companions are the city’s bartenders. But trouble still knows how to find him, and when Johnny Bridges shows up from the old neighborhood, begging for Matt’s help, Cordell finds himself drawn into a case full of beautiful women and bloody murder. It’s just like the old days—only this time, when the beatings come, he may wind up on the receiving end.

“The late McBain had some serious noir chops…A strong cast of characters—from rival private eye Dennis Knowles to tailor’s assistant Dave Ryan—creates a tangled web of deceit, with lies piling up faster than tokens in a subway station.”--Publishers Weekly

Gutter and the Grave