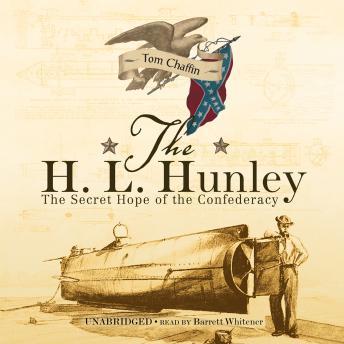 The H. L. Hunley: The Secret Hope of the Confederacy

On the evening of February 17, 1864, the Confederacy’s H. L. Hunley sank the Union’s formidable sloop-of-war, the USS Housatonic—to her own demise. For generations, searchers prowled Charleston’s harbor for the sunken boat, while legends surrounding the Hunley and its fate continued to grow. Even after the submarine was located in 1995 and recovered five years later, those legends have continued to grow.
Now, in a tour de force of document sleuthing and insights gleaned from the excavation of this remarkable vessel, distinguished Civil War–era historian Tom Chaffin presents the most thorough telling possible of the H. L. Hunley’s story. Of panoramic breadth, this Civil War saga begins long before the submarine was even assembled and follows the tale into the boat’s final hours and through its recovery in 2000.
The H. L. Hunley is an alternate selection of the Book-of-the-Month Club, History Book Club, and Military Book Club.

H. L. Hunley: The Secret Hope of the Confederacy