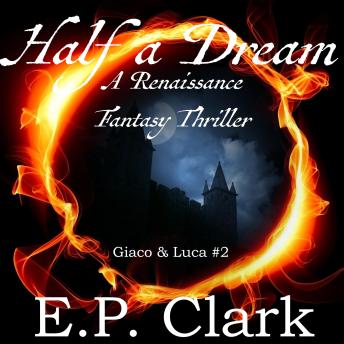 Half a Dream: A Renaissance Fantasy Thriller

Shadow is strong. Is courage stronger?

It’s been four years since Giacomo, bodyguard to Prince Luca of Fiori, followed his charge down into the shadowy world of forbidden magic. When Luca disappears once again, Giaco must cast aside his disbelief and delve into the world of fortune-telling and shadow-walking in order to find Luca and bring him back to safety.

And beyond that, he must face up to his own worst fears. Everyone considers Giaco to be a hero, but he is about to learn the true meaning of heroism. More than his own life depends on it.

Set in a magical world inspired by Renaissance Florence, this fantasy thriller will appeal to fans of dark and historical fantasy, as well as paranormal and occult suspense. This is the second book in the Giaco & Luca series, but can be listened to as a standalone.

Half a Dream: A Renaissance Fantasy Thriller

This title is due for release on March 21, 2020
We'll send you an email as soon as it is available!