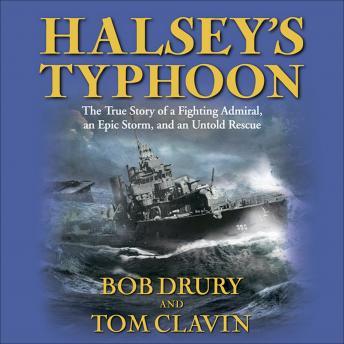 Halsey's Typhoon: The True Story of a Fighting Admiral, an Epic Storm, and an Untold Rescue

A gripping true account of courage and survival at sea against impossible odds-and one of the finest untold World War II sagas of our time. In December 1944, while on a mission to support MacArthur's invasion of the Philippines, Admiral William 'Bull' Halsey unwittingly steered his fleet of 170 ships into the teeth of a massive typhoon. The storm ultimately inflicted twice as much destruction and loss of life as the Battle of Midway, but Navy brass suppressed the scope of the disaster so as not to compromise the American advance on Tokyo. After the ensuing Court of Inquiry, Halsey never spoke again of the disaster. It is only now, thanks to documents declassified sixty years after the events and scores of firsthand accounts from survivors, that the story finally has been told.

Halsey's Typhoon: The True Story of a Fighting Admiral, an Epic Storm, and an Untold Rescue

This title is due for release on January 18, 2007
We'll send you an email as soon as it is available!