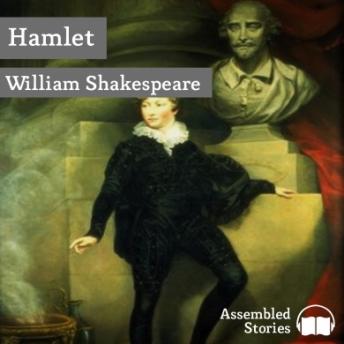 ’Hamlet’ was written between 1597 and 1600 just after the death of Shakespeare’s only son, Hamnet, one of twins, who died aged 11 in 1596. Despite scholarly argument that this was mere coincidence, it is impossible to believe that a writer as sensitive as Shakespeare would not be questioning the reason for the life and death of his son during those years.This production contends that ‘Hamlet’ was to a large degree shaped by the answers to those questions. In the drama a lot of advice is given by fathers to sons; the significance of life and death and the nature of man is examined; the qualities needed to make a well-rounded man fit for his adult role in the world are formulated. The play is full of lines such as ‘to thine own self be true,’ ‘conscience doth make cowards of us all,’ or ‘give me the man that is not passions slave,’ It is clear that Shakespeare was reflecting on his own moral code which he would have passed on to his son had he lived, teaching him that life has a purpose and he must be resolute in finding purpose in his own life. ‘Hamlet’ is a lesson in how to surmount the perils of adolescence, to navigate that rite of passage to maturity. Young people should study the play - it is an education which has a particular relevance for them.The adolescent Hamlet does indeed mature and achieve resolution yet he is destroyed. In that lies the tragedy.