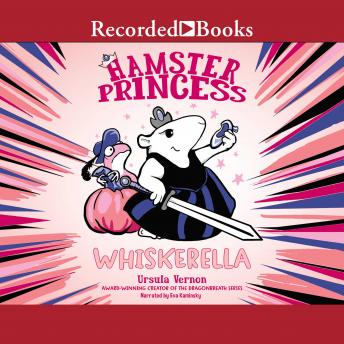 A funny, feminist twist on the Cinderella fairy tale for fans of fractured fairy tales Princess Harriet Hamsterbone is not the kind of princess who enjoys fancy dresses or extravagant parties. Cliff-diving, fractions, and whacking people with swords are more her thing. So when she's forced to attend a boring ball in honor of a visiting ambassador, Harriet is less than thrilled-until a bewitchingly beautiful stranger arrives. Who is she? And where did she come from? The mystery leads to a not-so-wicked stepsister, an incontinent lizard, and a fairy's spell that's really more of a curse. Luckily, Harriet knows a thing or two about curses. Smart, funny, and filled with swashbuckling adventure, book five in the critically acclaimed Hamster Princess series is a hilariously re-told fairy tale for the modern age. Series Overview: Harriet Hamsterbone is not your typical princess-she loves cliff-diving, fighting Ogrecats, and fractions! Perfect for fans of Babymouse and How to Train Your Dragon, this graphic-hybrid series is brimming with sass, smarts, and Ursula Vernon's trademark humor.