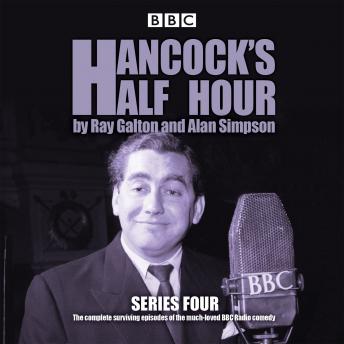 Created by Ray Galton and Alan Simpson in 1954, 'Hancock’s Half Hour' was the radio vehicle that made Tony Hancock a household name. Each week listeners would be admitted to the sometimes fantastical, sometimes mundane life of “the lad ‘imself”. Aided and abetted by Sid James, Bill Kerr Kenneth Williams and Hattie Jacques, Hancock would enter into the spirit of each episode with characteristic dolefulness.

This volume contains all 20 episodes from the fourth radio series, collected together for the first time. In these hilarious Half Hours, Hancock moves from 23 Railway Cuttings to the dosshouse to a Scottish castle; acquires a secretary; visits the ballet and tries his hand at a multitude of professions including agricultural labourer, coffee bar owner and policeman...

The episodes included are: 'Back from Holiday', 'The Bolshoi Ballet', 'Sid James' Dad', 'The Income Tax Demand', 'The New Secretary', 'Michelangelo 'Ancock', 'Anna and the King of Siam', 'Cyrano de Hancock', 'The Stolen Petrol', 'The Expresso Bar', 'Hancock's Happy Christmas', 'The Diary', 'The 13th of the Series', 'Almost a Gentleman', 'The Old School Reunion', 'The Wild Man of the Woods', 'Agricultural 'Ancock', 'Hancock in the Police', 'The Emigrant' and 'The Last of the McHancocks'.