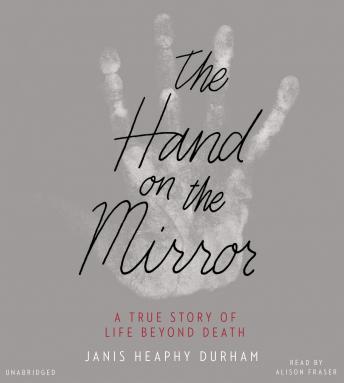 The Hand on the Mirror: A True Story of Life Beyond Death

An unbelievably believable story about the afterlife, with documenting photographs from the former publisher of a major metropolitan newspaper.
In 2004, Janis Heaphy Durham's husband, Max Besler, died of cancer at age 56. The daughter of a Presbyterian minister, she practiced her faith as she struggled with her loss. Soon she began encountering phenomena unlike anything she'd ever experienced: lights flickering, doors opening and closing, clocks stopping at 12:44, the exact time of Max's death. But then something startling happened that changed Heaphy Durham's life forever. A powdery handprint appeared on her bathroom mirror on the first anniversary of Max's death.
This launched Heaphy Durham on a journey that transformed her spiritually and altered her view of reality forever. She interviewed scientists and spiritual practitioners along the way, as she discovered that the veil between this world and the next is thin and it's love that bridges the two worlds.

Hand on the Mirror: A True Story of Life Beyond Death