Hannah and the Spindle Whorl 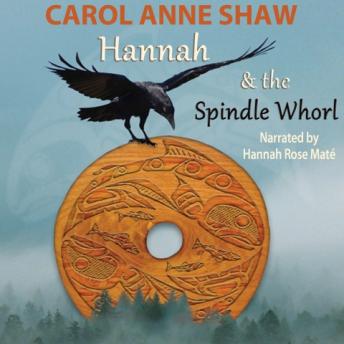 When twelve-year-old Hannah uncovers an ancient Salish spindle whorl hidden in a cave near her home in Cowichan Bay, she is transported back to a village called Tl'ulpalus, in a time before Europeans had settled in the area. Through the agency of a trickster raven, Hannah befriends Yisella, a young Salish girl, and is welcomed into village life. Here she discovers that the spindle whorl is the prize possession of Yisella's mother, Skeepla, a famous spinner and weaver. When Skeepla falls victim to smallpox, Hannah finally begins to open up about the death of her own mother. Hannah and Yisella are then accidentally left behind when the villagers journey to the mainland, and they witness the arrival of Governor James Douglas and numerous settlers on the Hecate. As the settlers pillage the village for souvenirs, Hannah and Yisella rescue the spindle whorl and, pursued by the ship's crew, escape into the dark forest. From the refuge in the cave, Hannah returns to her own time with a greater understanding of herself and the history of the First Nations. "A remarkably vibrant novel that links friendship and native history across time." - Ann Walsh

Hannah and the Spindle Whorl