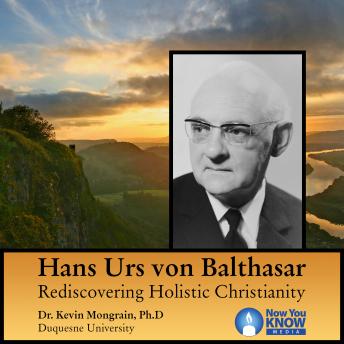 “There will never be beings unloved by God, since God is absolute love. ” – Hans Urs von Balthasar

Explore the profound spirituality of Hans Urs von Balthasar. Born in Switzerland, Balthasar (1905–1988) was one of the most prolific and sophisticated Catholic thinkers of the twentieth century. As you will discover, Balthasar’s theology provides a powerful model for the Catholic Church in the modern world.

In Hans Urs von Balthasar: Rediscovering Holistic Christianity, you will join Balthasar expert Dr. Kevin Mongrain (Ph.D., Yale University) in exploring this great theologian. When first approaching Balthasar, his corpus of works can seem like a daunting, complex labyrinth. Under Dr. Mongrain’s guidance, however, you will discover enlightening threads throughout Balthasar’s powerful thought.

Deeply influenced by the Jesuits, Balthasar eventually left the Society of Jesus to become a secular priest, that is, wholly engaged in the world. As you will see in this course, he became a spokesperson of the contemplative-charismatic strand of the Catholic tradition. His vision of the Church promoted unity between its hierarchical, theological, and contemplative strands.

Under Dr. Mongrain’s guidance, you will explore Balthasar’s ideas about authentic prayer, mystical experience, and prophecy. You will also see how his ideas addressed the modern world. Balthasar wove together spirituality and metaphysics, and he sought a holistic Christianity, that is, one that wove together the visions of the saints throughout the ages.

This title is due for release on October 6, 2014
We'll send you an email as soon as it is available!