Happy Chaos: From Punky to Parenting and My Perfectly Imperfect Adventures in Between 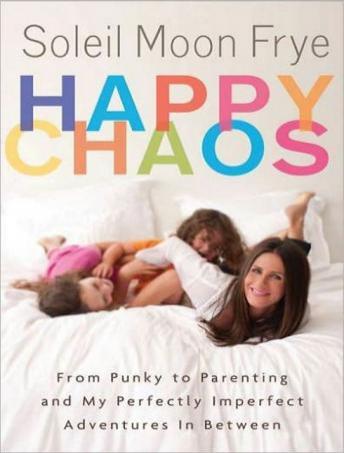 Enthusiastic, spunky, and positive, Punky Brewster was the quintessential eighties kid. Nearly thirty years later, Soleil Moon Frye-the adorable girl who played her on TV-is all grown up. Now she's a married mom of two, an entrepreneur who parlayed her successful kids' clothing line into a partnership with Target, and a social media whiz with millions of followers. Many of the same girls who watched Soleil on television are now grown up with children of their own, too, and they look to her as a go-to source for realistic, in-the-trenches parenting advice, inspiration, and fun. Happy Chaos invites those women into Soleil's world, and makes them revel in the chaos of their own lives, too.

Soleil believes that 'happy chaos' is the sign of a family operating at its best-when parents accept that they'll make mistakes, that there will be messes, tears and skinned knees. She learned to love a jumbled life during her own childhood, when her own mom created an atmosphere that was thoroughly unconventional. Their house in Los Angeles was a haven for many young stars of Soleil's generation, often far from home and looking for a safe place to hang out. In this book, she shows how her happy but chaotic childhood informed her parenting: Each chapter begins with a telling reminiscence before moving into insightful advice and fun stories about life with her husband and two adorable daughters.

Happy Chaos: From Punky to Parenting and My Perfectly Imperfect Adventures in Between