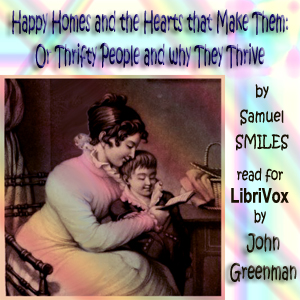 Happy Homes and the Hearts that Make Them: Or Thrifty People and why They Thrive

Samuel Smiles was a Scottish author and government reformer, but he concluded that more progress would come from new attitudes than from new laws. He wrote popular articles and books on his theories; ways people could help themselves overcome their problems. His book "Self-Help" brought him to celebrity status: almost overnight, he became a leading pundit and much-consulted guru. "Happy Homes" focuses on ways and reasons to be thrifty, how to find happiness in life, the opposite sex and work. What's particularly striking about this book is its clear-headed 19th Century advice for "improvement" and cultural stability, etc., combined with the entrenched and historic sexism of a paternalistic society. "Sow a thought and you get an act; Sow an act and you get a habit; Sow a habit and you get a character; Sow a character and you get a destiny."? Samuel Smiles, Happy Homes and the Hearts That Make Them - Summary by John Greenman and Wikipedia

Happy Homes and the Hearts that Make Them: Or Thrifty People and why They Thrive

This title is due for release on August 26, 2016
We'll send you an email as soon as it is available!