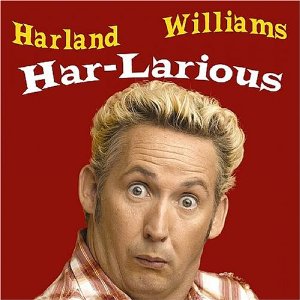 Who can forget his memorable role as the pee-drinking cop in "Dumb And Dumber"? The loveable horse killing stoner, Kenny, in "Half Baked"? The hitchhiking serial killer in "Something About Mary"? The silent motorcycle stud, Slater, in "Superstar"? The goofball astronaut, Fred Z. Randall, in "Rocketman"? The whale calling Sonar in "Down Periscope"? Or Roberta, the ugliest redhead in the world in "Sorority Boys"? And that's just a small sampling of his insanity. As a huge comedy draw, Harland packs houses across the country. He's seen regularly on Letterman, Leno, and Conan. He's done solo standup comedy specials for HBO, Comedy Central, CTV, and CBC. Other TV credits include his own sitcom, "Simon" for the WB, as well as a co-starring role on "The Geena Davis Show". This CD contains over 50 minutes of his best material. Comedy Central. 2005.

This title is due for release on November 22, 2005
We'll send you an email as soon as it is available!