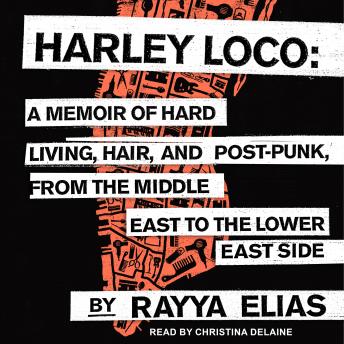 Harley Loco: A Memoir of Hard Living, Hair, and Post-Punk from the Middle East to the Lower East Side

When she was seven, Rayya Elias and her family fled the political conflict in their native Syria, settling in Detroit. Bullied in school and caught between the world of her traditional family and her tough American classmates, she rebelled early.

Elias moved to New York City to become a musician and kept herself afloat with an uncommon talent for cutting hair. At the height of the punk movement, life on the Lower East Side was full of adventure, creative inspiration, and temptation. Eventually, Elias's passionate affairs with lovers of both sexes went awry, her (more than) occasional drug use turned to addiction, and she found herself living on the streets-between her visits to jail.

This debut memoir charts four decades of a life lived in the moment, a path from harrowing loss and darkness to a place of peace and redemption. Elias's wit and lack of self-pity in the face of her extreme highs and lows make Harley Loco a powerful listen that's sure to appeal to fans of Patti Smith, Augusten Burroughs, and Eleanor Henderson.

Harley Loco: A Memoir of Hard Living, Hair, and Post-Punk from the Middle East to the Lower East Side