Harperland: The Politics of Control 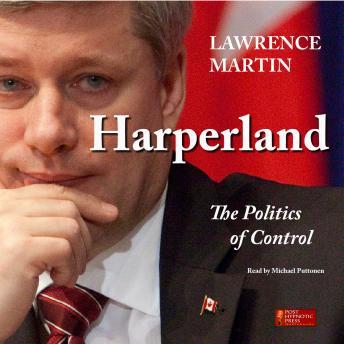 With another Canadian election slated for early May 2011, Harperland: The Politics of Control, by Marin Lawrence, is a must read (or hear) before you go to the polls. Harperland, the story Stephen Harper's first four years in power, soared to the top of the best-seller lists in the first week it was out. Peter C. Newman called it "A book of revelations...This is Stephen Harper unplugged." Don Martin of The National Post declared that it was an excellent book that provides insights, which the Prime Minister could well learn from.

In Harperland, Stephen Harper's governance comes under the microscope of prominent Globe and Mail columnist Lawrence Martin. Focusing on the growth of executive power under Harper and drawing on interviews with prominent insiders, Martin probes the smearing of opponents, the silencing of the public and diplomatic service, the secrecy, the prorogations, the unprecedented centralizing of power, and the attempted muzzling of the media. He examines controversies such as the existence of a secret dirty-tricks handbook, the Chuck Cadman affair, campaign financing, the dismissal of nuclear power head Linda Keen, the Afghan detainees cover-up, the turning of access-to-information laws into barricades to information, and more -- and lets readers draw their own conclusions. Tough but balanced, Harperland offers a clear picture of a skilled politician at a crucial point in Canadian politics.

Harperland: The Politics of Control

This title is due for release on March 30, 2011
We'll send you an email as soon as it is available!