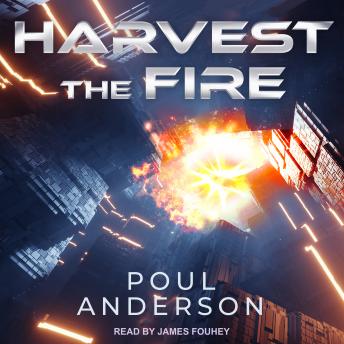 Many centuries in the future, no great destiny for humankind exists on Earth. The Lunarians, genetically engineered human adaptations bred to survive on the moon, have spread out toward the stars. But not even their colony on distant Proserpina is free from the suffocating influence of the Teramind, the vast network of intelligent machines that preserves order and logic in the universe. In his search for inspiration, poet and pilot Jesse Nichol discovers a new purpose when he reunites with his former lover, the mesmerizing Lunarian Falaire. Coerced into criminal hijacking, Jesse suddenly finds himself part of a bold anti-artificial intelligence conspiracy that could ultimately spell disaster, for nothing escapes the Teramind, especially humanity's desperate pursuit of freedom. And when human and machine are in conflict, the outcome will rock many worlds.

The third volume in what ranks among SFWA Grand Master Poul Anderson's greatest creation, Harvest the Fire imagines a machine-dominated future beyond the cataclysmic eras of Harvest the Stars and The Stars Are Also Fire. A breathtaking continuation of the epic tale, it is a story of courage and insurrection that celebrates the indomitable human spirit and the unconquerable restlessness of a race born to explore new worlds.