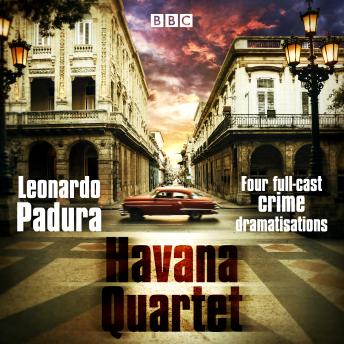 Leonardo Padura's award-winning Cuban detective series featuring Lieutenant Mario Conde.
Havana Blue: It's New Year's Day 1989, and Lieutenant Mario Conde wakes up with another terrible hangover and a case which is close to home. His schoolboy rival, now a party grandee, is missing.
Havana Gold: Lieutenant Conde goes on a trip through his childhood Havana haunts when a young female schoolteacher at his old school is murdered. And could it be that he has finally met the woman of his dreams?
Havana Red: Conde's fondly-held prejudices are tested by this case involving a man found strangled in Havana Woods wearing a beautiful red dress.
Havana Black: Conde has been suspended for taking a well-deserved pop at a fellow officer. But then he is called in for a case involving the disappearance of a Cuban with U.S. citizenship who has come home to visit his family.
Starring Zubin Varla as Mario Conde, David Westhead as Rangel, Lanre Malaolu as Manolo and Lorna Gayle as Josefina, Ben Crowe as Skinny, and Adjoa Andoh as Tamara.
Dramatised by Jennifer Howarth and Joy Wilkinson
Directed by Mary Peate
Leonardo Padura is a novelist and journalist who was born in 1955 in Havana where he still lives. He is best known internationally for the Havana Quartet series, all featuring Inspector Mario Conde. In 1998 Padura won the Hammett Prize from the International Association of Crime Writers, and in 2012 he was awarded the National Prize for Literature, Cuba's national literary award.