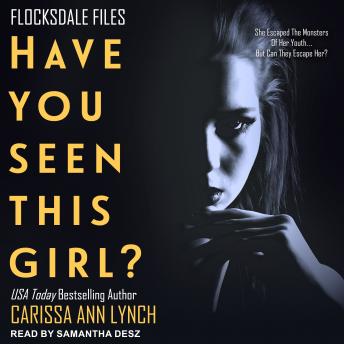 Have You Seen This Girl

Wendi Wise is a troubled young woman who snorts her breakfast through a straw and spends more time in rehab than in the real world . . .

Her life is seemingly out of control. But now she has a plan. That plan involves a sharp set of butcher knives. She's going back to where all of her troubles began . . . Flocksdale.

Wendi was lured away from a local skating rink, at the age of thirteen, and held captive in a place she calls 'The House of Horrors.' Dumped off blindfolded on the side of a dirt road, Wendi soon discovered that she was addicted to the drugs they fed her while she was captive.

Too scared to go home, and having a new habit to deal with, she hopped on a bus, vanishing from the family she loved. Vanishing from Flocksdale . . .

The town of Flocksdale is littered with fliers with a grainy image of young Wendi, and the words 'Have You Seen This Girl?' written below.

Now, eight years later, she's on a mission-a mission to find the mysterious house from her youth and the monsters who dwell inside it.

Have You Seen This Girl