He Had It Coming: Four Murderous Women and the Reporter Who Immortalized Their Stories 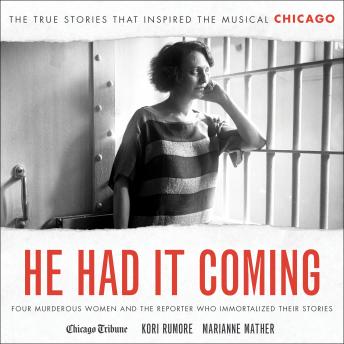 You probably know Roxie and Velma, the good-time gals of the 1926 satirical play Chicago and its wildly successful musical and movie adaptations. You might not know that Roxie, Velma, and the rest of the colorful characters of the play were inspired by real prisoners held in 'Murderess Row' in 1920s Chicago-or that the reporter who covered their trials for the Chicago Tribune went on to write the play Chicago.

Now, more than ninety years later, the Chicago Tribune has uncovered photographs and newspaper clippings telling the story of the four women who inspired the timeless characters of Chicago. But these photos tell a different story-and it's not all about glamour, fashion, and celebrity. They show a young mother in jail hugging her two-year-old daughter. They show an immigrant woman who doesn't speak the language of her judge, jury, and attorney. And they show women who used their images to sway public opinion-and their juries.

He Had It Coming: Four Murderous Women and the Reporter Who Immortalized Their Stories