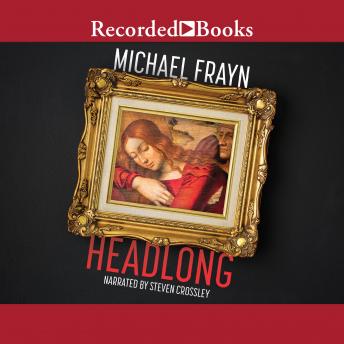 Celebrated for his playwriting, British author Michael Frayn has also written screenplays and several acclaimed novels. Headlong, a Booker Prize finalist, combines a heavy dose of humor with a fascinating glimpse into the world of priceless art. When Martin Clay and his art historian wife are asked to appraise the private collection of a loutish man, it is Martin, not his wife, who believes he has discovered a lost masterpiece from Dutch painter Bruegel. Keeping his thoughts closely guarded, he embarks on a fast-paced quest to confirm his suspicions. In an effort to swindle the painting away from its owner, Martin heads down a trail of lies and scams that has hilarious and unexpected results. Frayn's novel is both an entertaining, slapstick romp through one man's personal odyssey and a fascinating glimpse into the world of art history. Narrator Steven Crossley captures each moment of discovery without missing a beat through all of Martin's bumbling and scheming.

This title is due for release on August 26, 2011
We'll send you an email as soon as it is available!