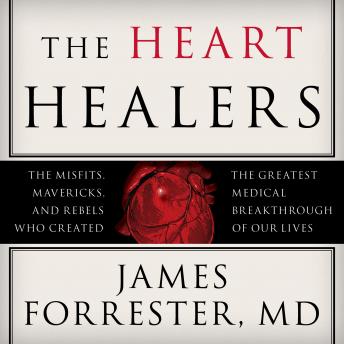 The Heart Healers: The Misfits, Mavericks, and Rebels Who Created the Greatest Medical Breakthrough of Our Lives

At one time, heart disease was a death sentence. By the middle of the twentieth century, it was killing millions and, as with the Black Death centuries before, physicians stood helpless. Visionaries, though, had begun to make strides earlier. On September 7, 1895, Ludwig Rehn successfully sutured the heart of a living man with a knife wound to the chest for the first time. In 1929, Dr. Werner Forssman inserted a cardiac catheter in his own arm and forced the X-ray technician on duty to take a photo as he successfully threaded it down the vein into his own heart . . . and lived. And on June 6, 1944-D-Day-another momentous event occurred far from the Normandy beaches: Dr. Dwight Harken sutured the shrapnel-injured heart of a young soldier and saved his life, and thus the term 'cardiac surgeon' was born.

In The Heart Healers, James Forrester, MD, tells the story of these rebels and the risks they took with their own lives and the lives of others to heal the most elemental of human organs: the heart. The result is a compelling chronicle of a disease and its cure, a disease that is still with us, but one that is slowly being worn away by the 'Heart Healers.'

Heart Healers: The Misfits, Mavericks, and Rebels Who Created the Greatest Medical Breakthrough of Our Lives